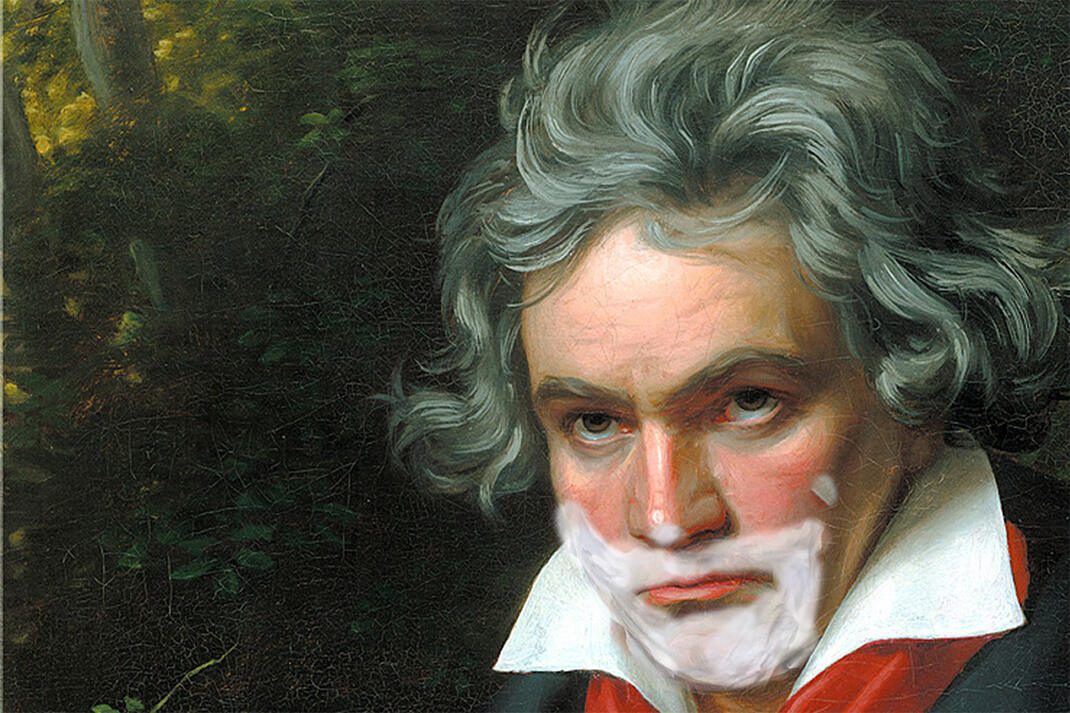 German composer. Grumpy. Famous for writing "that music from Die Hard." Was completely deaf—or was he?

Most everyone knows something about Beethoven. His most famous tune, that insistent and unyielding—DA DA DA DUHHHH—is something that people far and wide can sing. But there's more to Beethoven. A lot more. Take a moment to journey into the life and times of this volcanic genius. And join the Grant Park Music Festival as we salute Beethoven at the 250th anniversary of his birth. 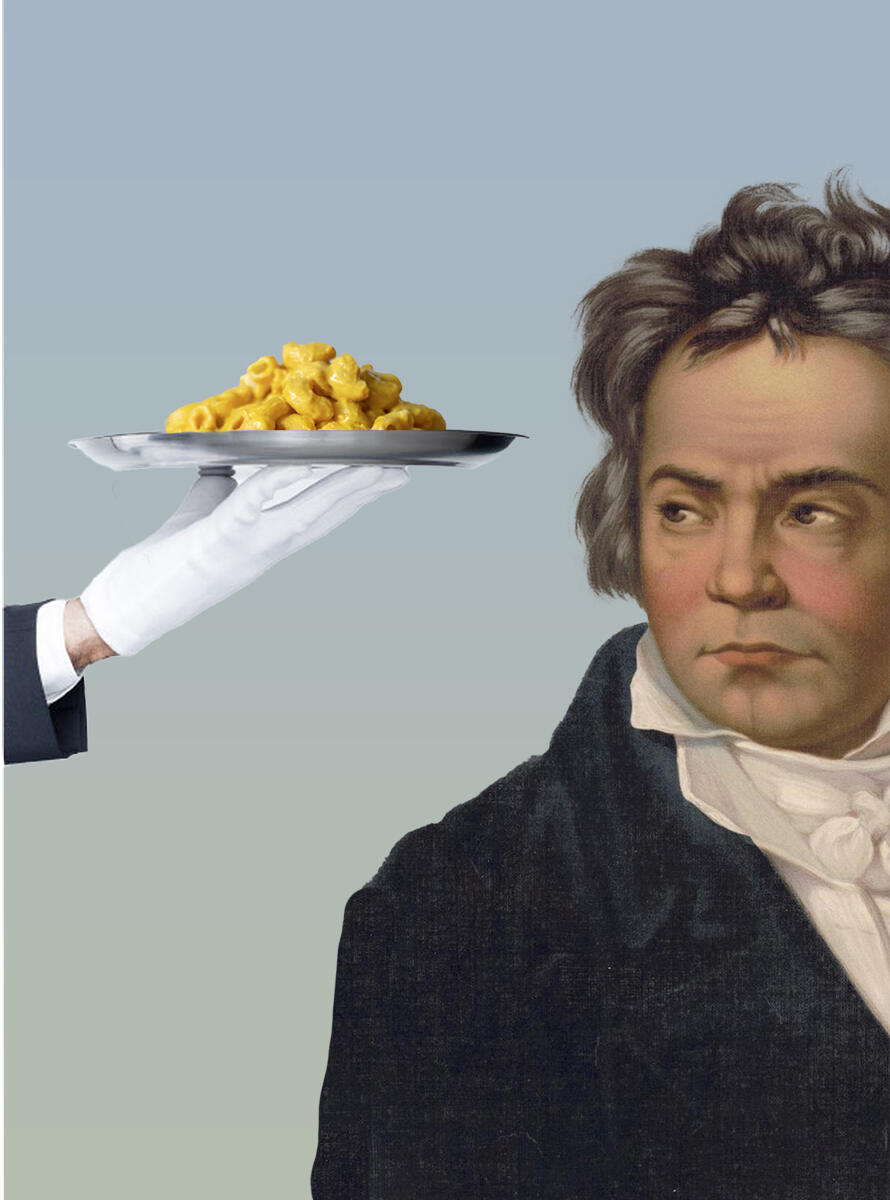 Beethoven’s favorite food was mac-n-cheese. Kasknoken was (and is) popular around Vienna (get the recipe here), and Beethoven especially liked the Italian import "Macaroni mit Parmesan-Käse."

9. Beethoven wrote down musical ideas the moment they struck. Whether he was on a nature hike, in a cafe, walking down the street or shaving, he would stop in his tracks and write them down.

8. We don’t actually know Beethoven’s birthday, only that he was baptized into the Roman Catholic faith on December 17th. We do know that it was customary to baptize infants within a day of their birth owing to a high rate of infant mortality. Thus, history celebrates his birthday on December 16.

7. Beethoven suffered from chronic illness: deafness, a distressed bowel, rheumatism, skin disorders, a variety of infections, and was jaundiced. An autopsy performed after his death in 1827 revealed cirrhosis of the liver due to copious amounts of wine and possibly a case of hepatitis.

6. Beethoven quit school to support his family at 13. Though his grandfather had been a prominent musician and wine merchant, Beethoven’s father drank away the family assets. Becoming a full-time court musician, young Ludwig supported his parents and two younger brothers. 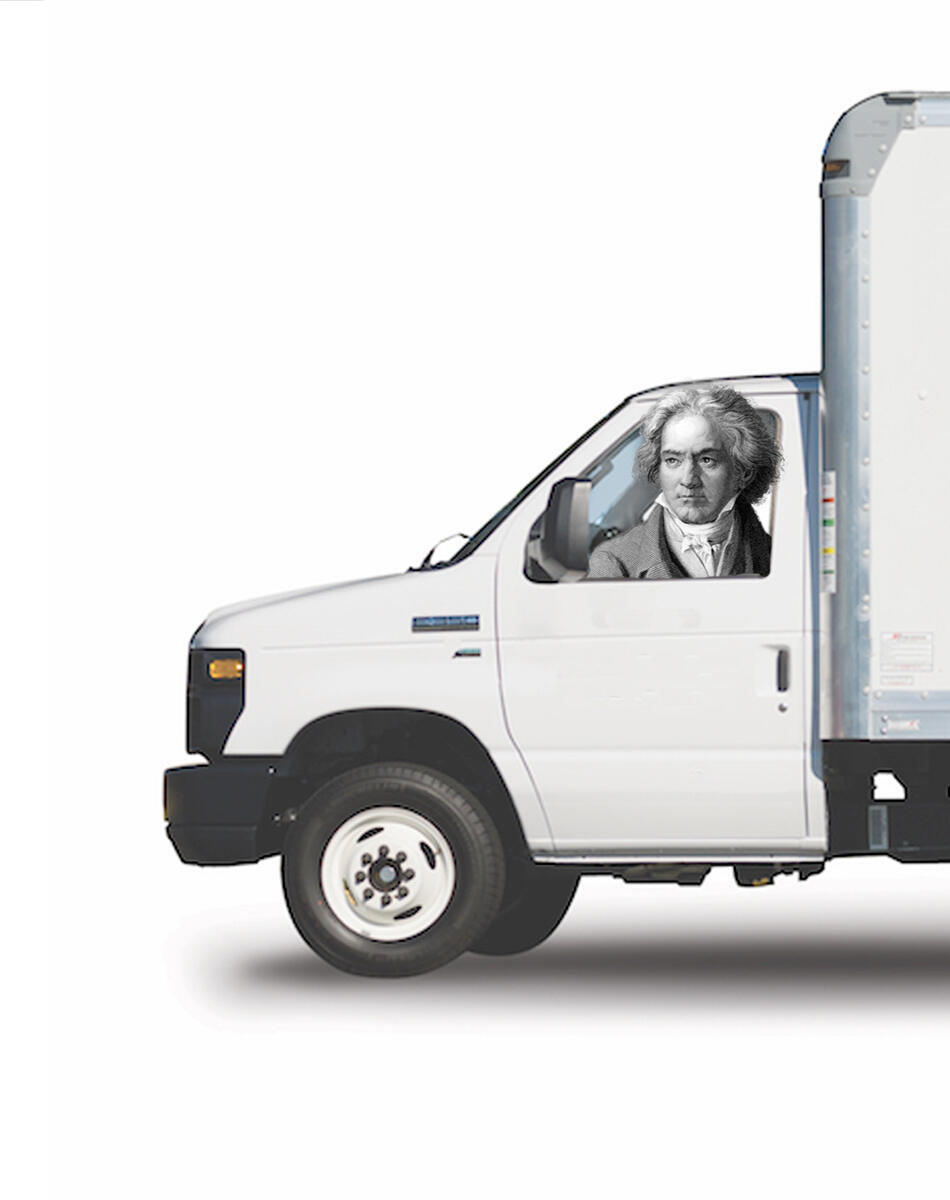 5. Beethoven moved a lot—sometimes several times in a year. He would get angry at a neighbor or a landlord, pack up his belongings and move to a different flat.

4. Beethoven wrote an elegy for a dead poodle. The song is believed to have been written in 1787 when he was around 17 years old. In fact, music poured out of the child Beethoven, but his father discourage composition and lied about the boy’s age in hopes that he would instead become a star performer like the Mozart children (it was more lucrative). Many of Beethoven’s childhood compositions have been lost.

3. Why so sad? In the year 1812, sculptor Fritz Klein inserted straws into the composer’s nostrils and coated his face in plaster. During the sitting, Beethoven began to panic until he ripped the cast from his face. Klein later pieced the mask together and created a bust which shows every line and every pock mark. It also shows Beethoven in a state of extreme distress. Many works of art have since been based upon that image of Beethoven wearing a deep frown.

2. Beethoven’s grandfather emigrated to Bonn from Flanders, hence the middle name of “van.” Scholars have debated over the meaning of the name, whether it refers to beet farming (beet + hoven = beet gardens) or whether the name points to the village of Neder-Betuwe. Nevertheless, the Dutch are happy to lay some claim to the composer; today you’ll find a lively boulevard in Amsterdam named Beethovenstraat.

1. Beethoven might not have been stone deaf. He was still in his twenties when he began to suffer ringing in the ears. At that point he was a star pianist around Vienna, and had yet to write his First Symphony. By his forties, people communicated with him on paper. But that’s not the end of the story. New research suggests he might have had some hearing in his left ear. A Kent State professor is currently translating Beethoven’s conversation books, and has found several references to faint sounds trickling through. Nevertheless, Beethoven depended solely on the music he heard in his head to write his last three symphonies (including the Ninth), a number of string quartets, piano sonatas, Missa Solemnis, and more.