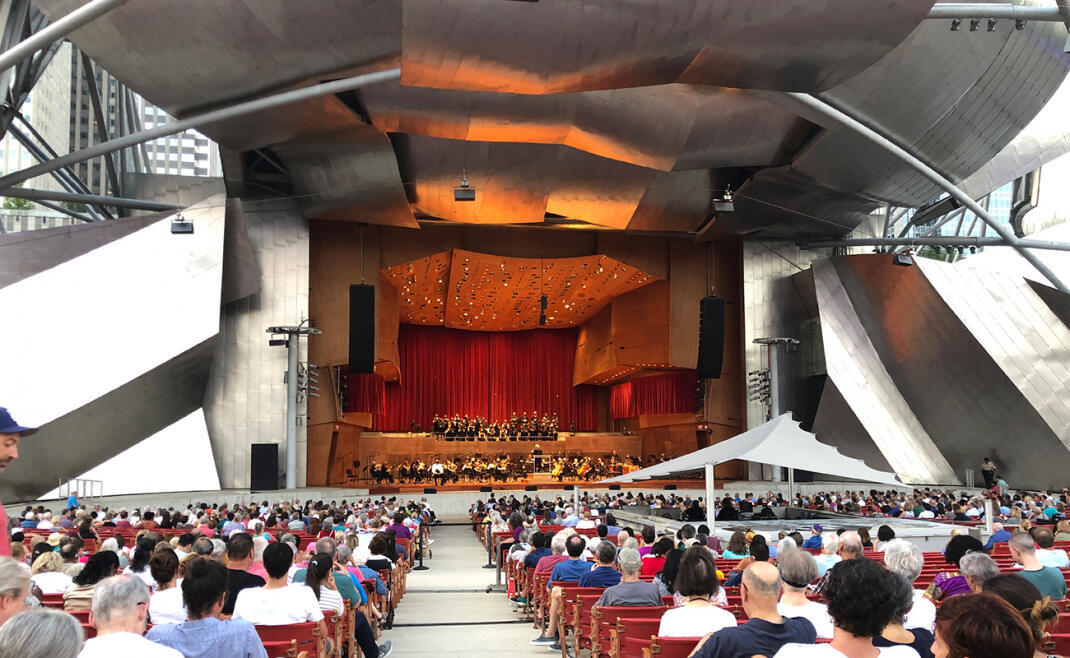 The Grant Park Music Festival steps to the vanguard of classical music with a season inspired by the bounty of America’s diversity. Celebrating a range of conductors, composers and guest artists, the series reflects the bustling metropolis of Chicago and the greater American tapestry.

The season includes a thrilling lineup of classical favorites such as the Beethoven Symphony No. 7, the Brahms Requiem, Pictures at an Exhibition, and the Tchaikovsky Piano Concerto No. 1. The lineup offers fun-filled evenings of lighter fare, including Rhapsody in Blue, Bravo Broadway, and Cirque Returns, with the return of the high-flying, death-defying aerialist team Troupe Vertigo. The Festival also welcomes the return of some Festival favorites, including the incomparable violin virtuoso Augustin Hadelich and piano legend Stephen Hough.

CHICAGO (January 10, 2023) – The Grant Park Music Festival today announced its 2023 season under the leadership of Artistic Director and Principal Conductor Carlos Kalmar. The Grant Park Orchestra and Chorus will present a ten-week series that runs from June 14—August 19 at Millennium Park’s Jay Pritzker Pavilion and other venues throughout the city. Christopher Bell returns as Festival Chorus Director.

All concerts are free and most will take place on Wednesday and Friday evenings at 6:30 p.m. and Saturday evenings at 7:30 p.m. (Exceptions include a concert on Thursday, June 29 and no concerts on June 30 and July 1). A complete schedule follows and can be found at gpmf.org.

The Grant Park Music Festival is presented by the Grant Park Orchestral Association with key support from the Chicago Park District and the Chicago Department of Cultural Affairs and Special Events.

· PREMIERES – The 2023 season features two world premieres by American composer Xavier Foley: a string quartet written for the Festival String Fellows, and a work for double bass and piano featuring the composer with pianist Joyce Yang (July 16). The Grant Park Orchestra will also play the Illinois premiere (August 4-5) of a work by American composer Jessie Montgomery, her viola concerto titled L.E.S. Characters, which was co-commissioned by the Grant Park Music Festival in 2020. The work features soloist Masumi Per Rostad.

· GUEST CONDUCTOR DEBUTS – The 2023 Festival proudly introduces a new crop of conducting talent to the Pritzker stage, including Canadian conductor Jordan de Souza, who is active in European opera houses and is beginning to make a name for himself in the United States. Rising-star Italian conductor Valentina Peleggi, currently music director of the Richmond Symphony, makes her Festival debut; French conductor Ludovic Morlot, formerly of the Seattle Symphony, makes his Festival debut; German conductor Kevin John Edusei, who is appearing with major orchestras across Europe, leads the Grant Park Orchestra in July. Ken-David Masur is music director of the Milwaukee Symphony and is a champion of contemporary music. Broadway veteran Gerald Steichen makes his Festival debut in the ever-popular Broadway program, and Eric Jacobsen, co-founder of the dynamic classical ensemble The Knights, makes his Festival debut.

· ARTISTS-IN-RESIDENCE – New this year, distinguished artists will come into the Festival atmosphere to create deeper engagement and a more enriching experience for local music students, Festival musicians, and the public.

The 2023 season features two artist residencies: double-bass virtuoso and composer Xavier Foley shows off his range, serving as soloist with the Orchestra in music by Nina Rota (June 21) and as composer in the world premiere of his string quartet, written for the Festival String Fellows. Behind the scenes, Foley will provide a coaching session with the Fellows. He’ll also teach a composition masterclass (June 20) for students from the Merit School of Music and Access Contemporary Music, part of the Festival’s Visiting Masters series.

The Grammy Award-winning pianist Joyce Yang returns to the Festival to play Tchaikovsky’s Piano Concerto No. 1 (July 12) and Franz Liszt’s Totentanz (July 14-15). Ms. Yang’s residency includes a session with local piano students (a Visiting Masters event on July 11) and a performance with Xavier Foley featuring the world premiere of Foley’s new work for double bass and piano (July 16). Both works by Xavier Foley are Grant Park Music Festival commissions. As part of their residencies with the Festival, both artists will participate in the Pre-Concert Lectures series ahead of performances with the Grant Park Orchestra.

Festival Next reimagines the classical music experience, breaking the fourth wall to deliver a deeper engagement between audience and artist. This year, Festival Next features public master classes and recitals with visiting guest artists, as well as world-premiere commissions with composer residencies.

The Grant Park Music Festival continues its commitment to Festival Connect, a comprehensive initiative aimed at providing music education and access for audiences of all ages and backgrounds. Working with the Chicago Park District and its Night Out in the Parks program, Festival Connect engages Chicago’s diverse neighborhoods with performances by the Grant Park Orchestra, the Grant Park Chorus, and its String and Vocal Fellows.

o        The Festival String Fellowship program, composed of four string players who rehearse and perform with the Grant Park Orchestra and perform as a chamber ensemble as part of the Chicago Park District's Night Out in the Parks program. In addition, they receive mentoring from Carlos Kalmar, guest artists and other members of the orchestra, and serve as teaching artists for the Festival’s Classical Campers program. In 2023, they will also work with Resident composer Xavier Foley on a world-premiere composition written specifically for them to perform.

· GRANT PARK ORCHESTRA AND GRANT PARK CHORUS IN THE NEIGHBORHOODS: The Grant Park Orchestra will reprise its concert of Coleman, Saint-Saëns, and Tchaikovsky at the South Shore Cultural Center (June 30). Christopher Bell and the Grant Park Chorus will return to the South Shore Cultural Center (June 26) and the Columbus Park Refectory (June 27) for a program that includes the gorgeous choral work Illuminare by Elaine Hagenberg. These free concerts are a part of Chicago Park District’s Night Out in the Parks program.

· CLASSICAL CAMPERS: The Festival hosts Classical Campers, its popular half-day music immersion program for children ages 6-12, in collaboration with the Chicago Park District.  Throughout the season, nearly 2,000 campers from more than 30 different Chicago neighborhoods will learn about the instruments and sections of the orchestra with Festival educators; take part in hands-on musical activities, and conclude their day with a visit to a Festival rehearsal and talkback with Grant Park Orchestra members. Classical Campers often provides children with their first exposure to a live classical music performance.

· YOUNG ARTISTS SHOWCASE: On Fridays at 5:30 p.m., before the Grant Park Orchestra takes the stage, audiences are treated to concerts by students from local music schools and summer music programs at the front of the Great Lawn at the Jay Pritzker Pavilion.

· OPEN LUNCHTIME REHEARSALS: Orchestra and chorus rehearsals take place June 13 through August 18, Tuesdays through Fridays (typically) between 11 a.m. - 1 p.m. Rehearsals are free and open to the public. Audiences are welcome to sit in the Pavilion Seating Bowl. Festival docents will talk about the week’s concerts during rehearsal breaks.

· BROADCAST: Ten concerts will be broadcast on 98.7WFMT, Chicago’s classical and fine arts radio station, and online at wfmt.com/listen.

Memberships to the Grant Park Music Festival 2023 season are now available and include reserved access for every Festival concert along with premium benefits, such as access to concert receptions and events, and discounts on parking. The Festival also offers packages with fewer concerts that include reserved seats with complimentary exchange privileges, as well as Choose Your Own four or six concert series packages. Memberships begin at $99.

In addition, every Grant Park Music Festival concert has seats that are free and open to the public. Seats in the Seating Bowl and on the Great Lawn are available on a first-come, first-served basis.

For nearly 90 years, the Grant Park Music Festival has been Chicago’s summer musical sensation, demonstrating that classical music performed by a world-class orchestra and chorus can have a transformative impact on the city. Showcased in the city’s most spectacular setting, the Festival continues to be the summer gathering place for all of Chicago. The Jay Pritzker Pavilion in Millennium Park is the official home of the Grant Park Music Festival, with free seats available for every concert.

The Department of Cultural Affairs and Special Events (DCASE) also provides key support to the Grant Park Music Festival. DCASE supports artists and cultural organizations, invests in the creative economy, and expands access and participation in the arts throughout Chicago’s 77 neighborhoods. As a collaborative cultural presenter, arts funder, and advocate for creative workers, DCASE programs and events serve Chicagoans and visitors of all ages and backgrounds, downtown and in diverse communities across our city — to strengthen and celebrate Chicago. For details, visit Chicago.gov/DCASE.

Kalmar is Director of Orchestral and Conducting Programs and Principal Conductor of the Cleveland Institute of Music. He served as music director of the Oregon Symphony for nearly two decades where he received several Grammy nominations. He previously served as the Chief Conductor and Artistic Director of the Spanish Radio/Television Orchestra and Choir in Madrid as well as the Music Director for the Hamburg Symphony, the Stuttgart Philharmonic, Vienna’s Tonkünstler Orchestra, and the Anhaltisches Theater in Dessau, Germany. Kalmar keeps an active schedule conducting in concert halls and opera houses around the world. Born in Uruguay to Austrian parents, he and his family returned to Vienna when he was fifteen.

Christopher Bell has served as Chorus Director of the Grant Park Chorus since 2002. Each year, he conducts several concerts featuring the Chorus and the Grant Park Orchestra. He and the Chorus are recipients of the coveted Margaret Hillis Award for Choral Excellence from Chorus America and have received glowing reviews from both critics and audiences alike. In 2013, Bell won the Michael Korn Founders Award for Development of the Professional Choral Art.

In 1996, Bell founded the National Youth Choir of Scotland and continues to serve as its Artistic Director. Between 2007 and 2018 he was chorus director of the Edinburgh Festival Chorus, and between 2017 and 2020 was Artistic Director of the Washington Chorus. Bell was awarded an Honorary Doctorate in Music from the Royal Conservatoire in Scotland in 2012. In 2015, he was awarded an Honorary Doctorate from the University of Aberdeen.

Millennium Park is the #1 attraction in the Midwest and among the top 10 most-visited sites in the United States. It is also the anchor of an urban cultural campus (Millennium Park Campus) that includes the Chicago Cultural Center, Maggie Daley Park and The Art Institute of Chicago. Millennium Park is located on Michigan Avenue, bordered by Randolph St. to the north, Columbus Dr. to the east and Monroe St. to the south. The Park is open daily 6 a.m. to 11 p.m. For the latest news and events, visit millenniumpark.org, like us on Facebook (@MillenniumParkChicago) and follow us on Twitter and Instagram (@Millennium_Park).

A salute to Broadway classics with music from Rent, Les Misérables, The Wiz, Dear Evan Hansen, Cabaret and more.