Acres of Rubble and a Vision for a Great City 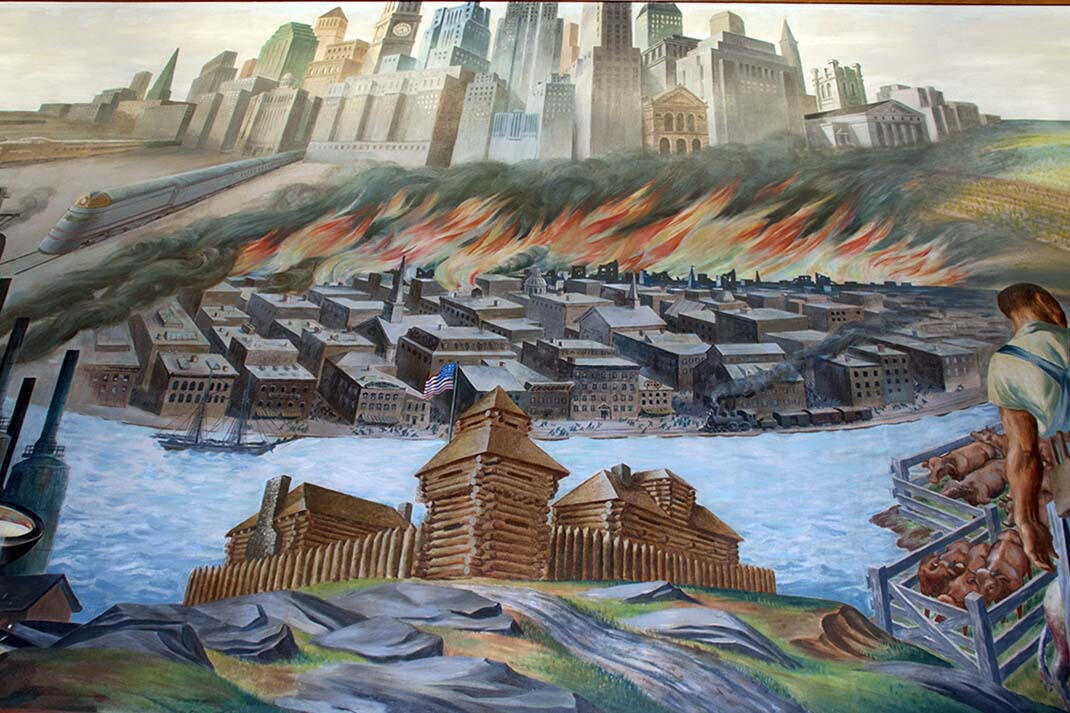 "Chicago: Epoch of a Great City," a WPA mural by Harry Sternberg installed at the United States Post Office at the corner of Southport and Irving Park Road in Chicago

“Late one night, when we were all in bed,
Old Mother Leary left a lantern in the shed,
And when the cow kicked it over,
she winked her eye and said,
‘There’ll be a HOT time on the old town tonight.’”

No one knows how it started, but the fire that exploded from the barn of Catherine and Patrick O’Leary—150 years ago this week—engulfed much of the area we think of as downtown Chicago. Laying waste to more than 2,000 acres of land, the Great Chicago Fire left more than 100,000 homeless and claimed some 300 lives. Jumping northward across the river, the conflagration raged until rain quenched its flames on October 10th. The next day, despite the devastation, The Chicago Tribuné [sic] read: “CHEER UP ... CHICAGO SHALL RISE AGAIN.”

Over the coming years, the disaster fueled a surge in urban development and a golden age in architecture. Between 1872 and 1879 the city issued more than 10,000 building permits. Workers poured into town, and a few early visionaries laid the groundwork for the special place we know as Chicago.

It’s often said that “Chicago’s front yard”—Grant Park—sits atop rubble from the Great Chicago Fire. While this is partly true, there was a much more inspired and deliberate process at work that began in the 1830s.

Back then, Chicago was home to some 4,000 people. Fort Dearborn, which was perched at the mouth of the Chicago River, had just been decommissioned, and the locals had an eye on setting the land aside for a public park. Putting forth a resolution, they stipulated that twenty acres on the shore of Lake Michigan be “reserved in all time to come for a public square, accessible at all times to the people.” 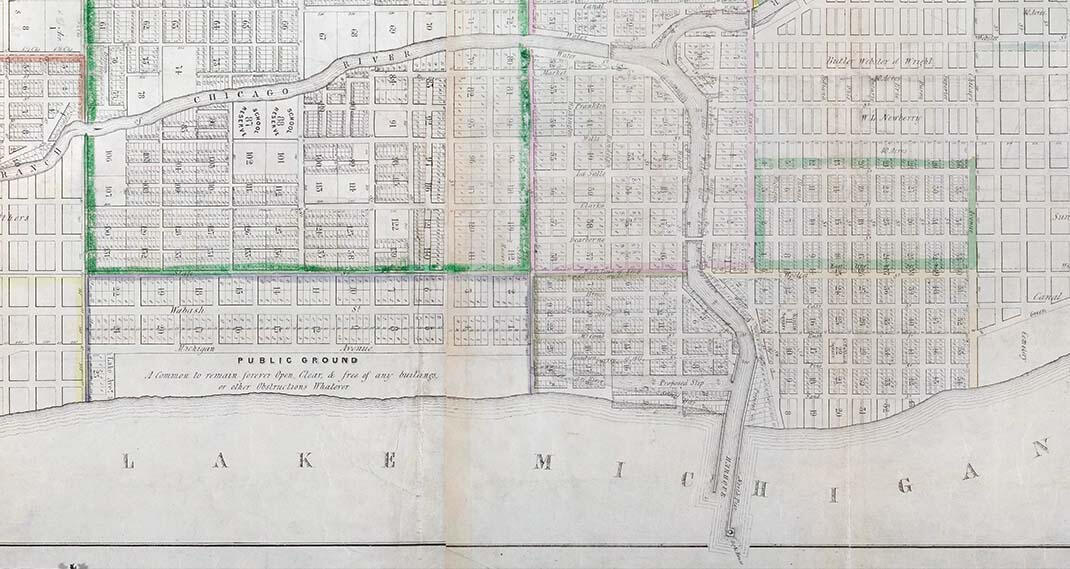 An 1836 Chicago Map shows the strip of land (lower left) set aside as "Public Ground" east of Michigan Avenue between Randolph and Twelfth Street.

Soon, the Illinois & Michigan Canal (I&M) commissioners got behind the resolution. In 1836, they issued a map designating parcels of land for sale in what is now the Loop, and set aside the tract east of Michigan Avenue between Randolph and Twelfth Street (Roosevelt Road) as “Public Ground—A Common to Remain Forever Open, Clear, and Free of Any Building, or Other Obstruction Whatever.” Known as Lake Park, that tract represented a strip some 400 feet wide east of Michigan Avenue. But there were much larger plans at work. The I&M commissioners aspired to make Chicago a transportation hub by connecting the Great Lakes to the Mississippi River. Mapping out a water route from the North Atlantic to the Gulf of Mexico, they proposed a massive feat of engineering around Chicago that involved dredging natural waterways as well as the digging of a 96-mile canal. To start, they needed to solve the navigability issues at the mouth of the Chicago River. 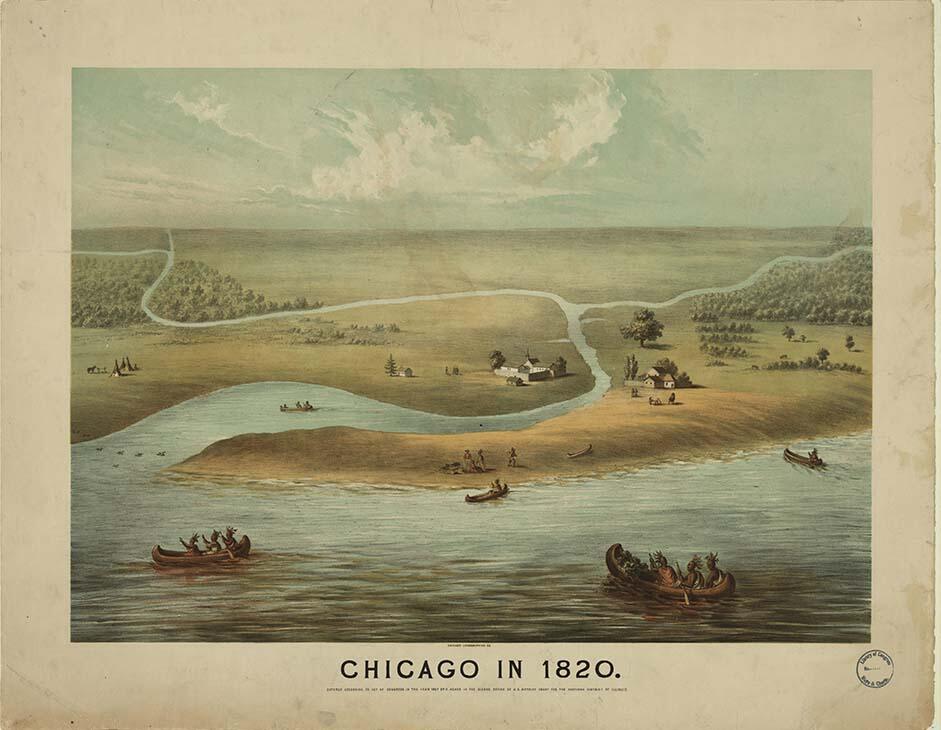 At the time, the river deposited large amounts of sand into Lake Michigan, forming an unwieldy dogleg to the south. To solve the problem, the Canal commissioners moved the mouth of the river by cutting across a massive sandbar. To accomplish this, they built a breakwater and two piers extending into the lake to scatter the silt.

Of course in 1848, the very year the I&M Canal opened, a new industry was poised to set Chicago on a very different path: the Galena and Chicago Union Railroad dispatched its first train. The combined infrastructure between water and rail would place Chicago at the epicenter of cotton and sugar from the South; meat, corn and wheat from the Midwest, and lumber and fur from the North. At the same time, civic leaders vigorously fought attempts by industrialists to swallow up the lakefront park for commercial use—although there were some unintended consequences. 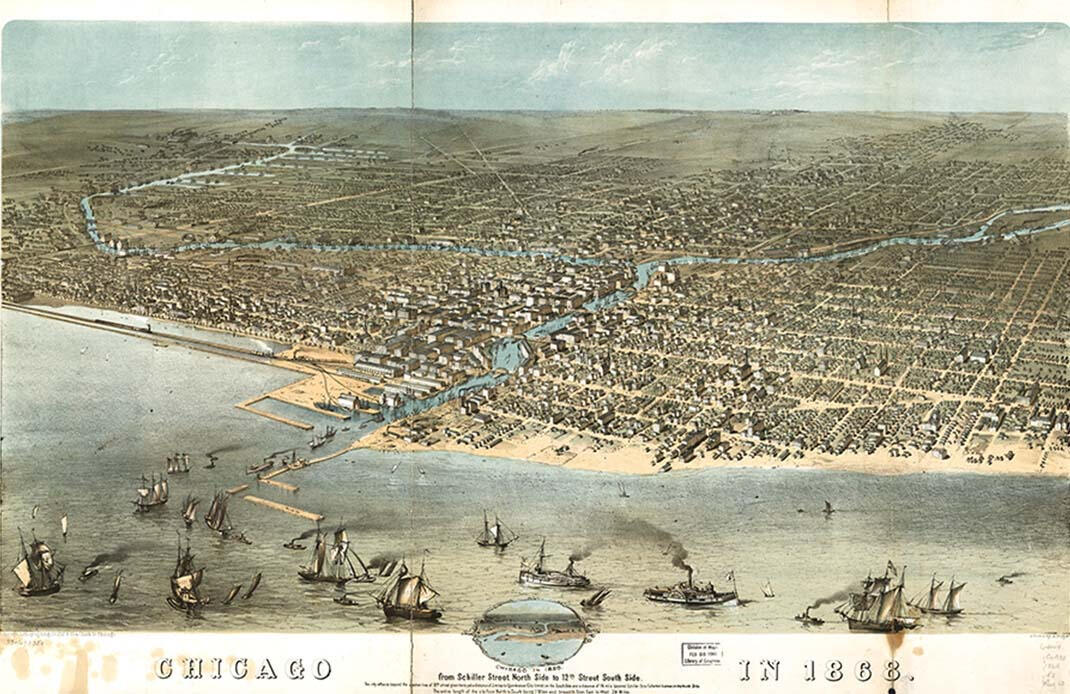 An 1868 lithograph of Chicago shows the new train trestle (center left) cutting across an area eroded by waves east of Michigan Avenue.

By midcentury, the redirected mouth of the Chicago River no longer replenished the “Public Ground” east of Michigan Avenue, resulting in substantial erosion of the lakefront park. An 1868 map shows only a narrow strip of beach remaining of an area that had been 400 feet wide, and Michigan Avenue properties were getting pummeled by storm surges. In a deal with the Illinois Central Railroad in 1852, Chicago granted river access in exchange for a new breakwater; soon a train trestle appeared overwater, just east of where Cloud Gate (The Bean) stands today. What was left of Lake Park, and the resulting lagoon between Michigan Avenue and the tracks became a popular spot for swimming, boating and ice skating in the winter. At the same time, there was much interest in restoring the shoreline parkland that had already been lost.

In 1870, the year before the Great Fire, the Chicago Board of Public Works announced its Plan for Lake Park, which involved adding landfill between the beach and the train trestle. Material for the fill came from the city’s garbage, coal ash, construction debris, industrial waste, and most especially material dredged from various waterways by the Army Corps of Engineers. After the fire (in truth, there were lots of smaller fires in those years), crews dumped the charred wreckage into the lagoon, accelerating the massive public works project already underway. By the end of the decade, a large exhibition building stood where the lagoon had been (at the present-day site of the Art Institute of Chicago), more railroad tracks had been laid on the eastern edge of the park, and the landfill continued to advance eastward.

Public Ground—A Common to Remain Forever Open, Clear, and Free of Any Building, or Other Obstruction Whatever.

In 1909, Daniel Burnham and Edward H. Bennett published their Plan of Chicago, setting aside a 25-mile strip of parkland along the city’s lakefront. Over the years, there were numerous attempts to violate the 1836 proclamation designating Grant Park, so named in 1901, as a space “Forever Open, Clear, and Free of Any Building.” And there were many standoffs between the railroad, commerical developers and various civic leaders—all insisting theirs represented the best use of the filled-in land east of Michigan Avenue. One of those leaders, Aaron Montgomery Ward, would rise above the rest. Fighting developers all the way to the Illinois State Supreme Court on four seperate occasions, Ward emerged as an early hero in the preservation of the land that would one day become Millennium Park—but that’s a story for another time.