Music in the Time of Need 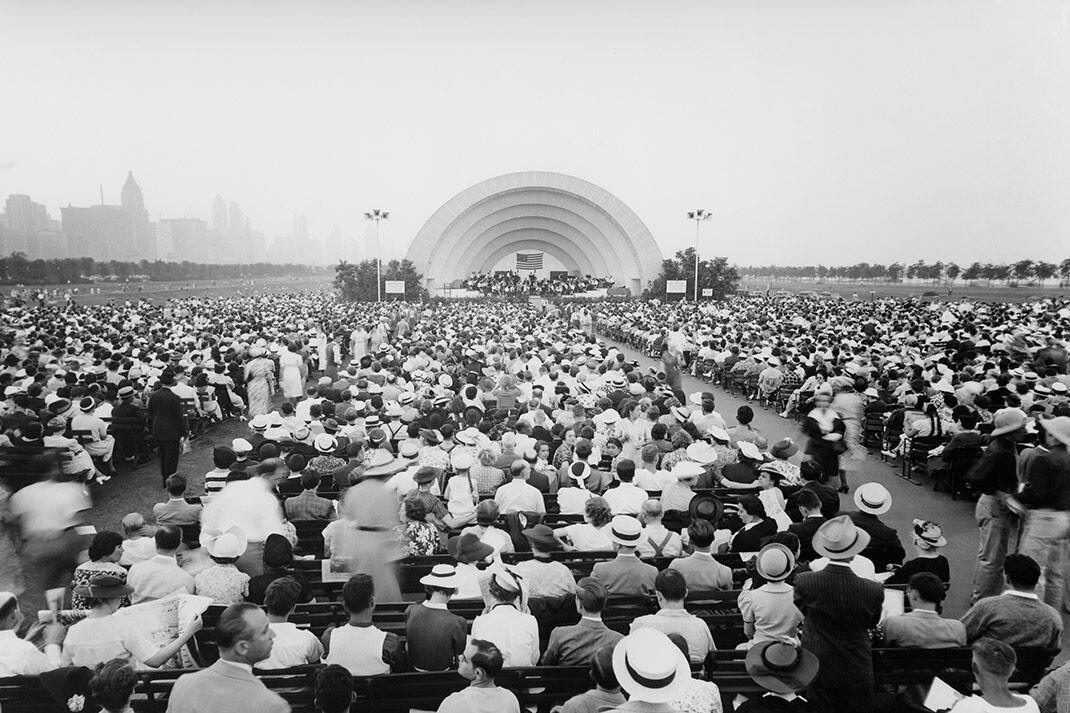 Musicians make music—always—even in times of social upheaval. The musicians' legacy is one of perseverance and a steadfast belief in the human spirit.

Music means different things at different times. In our darkest hour, it can offer solace and even an ounce of courage. In World War II, as German bombers hammered London’s landmarks and homes, auditoriums (along with everything else in the city) went dark. Orchestras scattered, but a single pianist stood in defiance. Over a 6 1/2-year period, Dame Myra Hess organized lunchtime concerts—1,698 performances—for Londoners at the National Gallery. Even as the threat of German bombs grew ever closer, the performances continued. At times these daily musical gatherings migrated to safer locations—but were never canceled.

In 1935, the Grant Park Music Festival came into being during a different sort of barrage—an economic one. The stock market crash of 1929 unleashed a cascade of financial setbacks. Jobs evaporated. Factories closed, and people lost confidence in their banks. By 1931, more than 2,000 banks had failed, and Chicago, with its base in manufacturing, was particularly hard hit. In those days, people took to the streets. They marched for jobs. They marched for food. College-educated men sold apples on street corners, while others stood in line for a bowl of soup or a head of cabbage. Grant Park became a focal point for protesters and a refuge for displaced persons.

The first time I mentioned park concerts, they laughed in my face...

That’s when a union boss named James C. Petrillo had a bright idea. Petrillo, a not particularly brilliant trumpet player, was head of the Chicago Federation of Musicians and had wheedled (or muscled) his way onto the Chicago Park District Board in 1934. Already he had made a name for himself as a crusader for live music (even before the Depression, the advent of sound recording had begun to squeeze musicians out of jobs). Petrillo quickly rose to the position of park commissioner. Seeing an opportunity to put “his boys” to work, Petrillo came up with a proposal to provide free summertime concerts to the public.

“The first time I mentioned park concerts, they laughed in my face,” he told an interviewer in 1975. “The park employees hadn’t been paid for 21 months. Where are you going to get money for the park concerts when the policemen aren’t being paid?” Petrillo not only managed to secure the funding for nightly concerts for July and August, he pulled strings to book major soloists such as Jascha Heifetz. That summer, tens of thousands of people crowded around the park’s band shell (commissioned by Mayor Anton Cermak in 1931). Performers included the Chicago Symphony Orchestra, the Civic Opera House Orchestra, the Women’s Symphony Orchestra, as well as a number of big bands. By Labor Day, officials estimated the series attendance at 1.9 million people (an impressive number for a city of 3.4 million). The success of that first season left no doubt: the concerts would be back.

“Yesterday was Christmas in Chicago,” wrote Chicago Daily Tribune in the summer of 1937, “and the city’s citizens swarmed to Grant Park to enjoy at absolutely no cost a show which any theater in the land would mortgage its future to obtain. Cast in the role of Santa Claus was James C. Petrillo.”

In 1944, at the height of World War II, the Festival created the ensemble now known as the Grant Park Orchestra. In its Millennium Park home, the Orchestra and Chorus continue to give the gift of music to Chicagoans, performing a 10-week season with additional chamber concerts in neighborhood parks across the city.

Today, Chicago faces the pandemic COVID-19, a new kind of threat to the safety and well-being of its people. In the midst of the "Stay-at-Home" order, the staff of the Grant Park Music Festival is taking up the mantle of Festival organizers of the past: to stage free concerts for the Chicago community, to lift the spirit in a time of distress, and help reawaken the city after its long sleep.