A Young Artist in the Age of Coronavirus 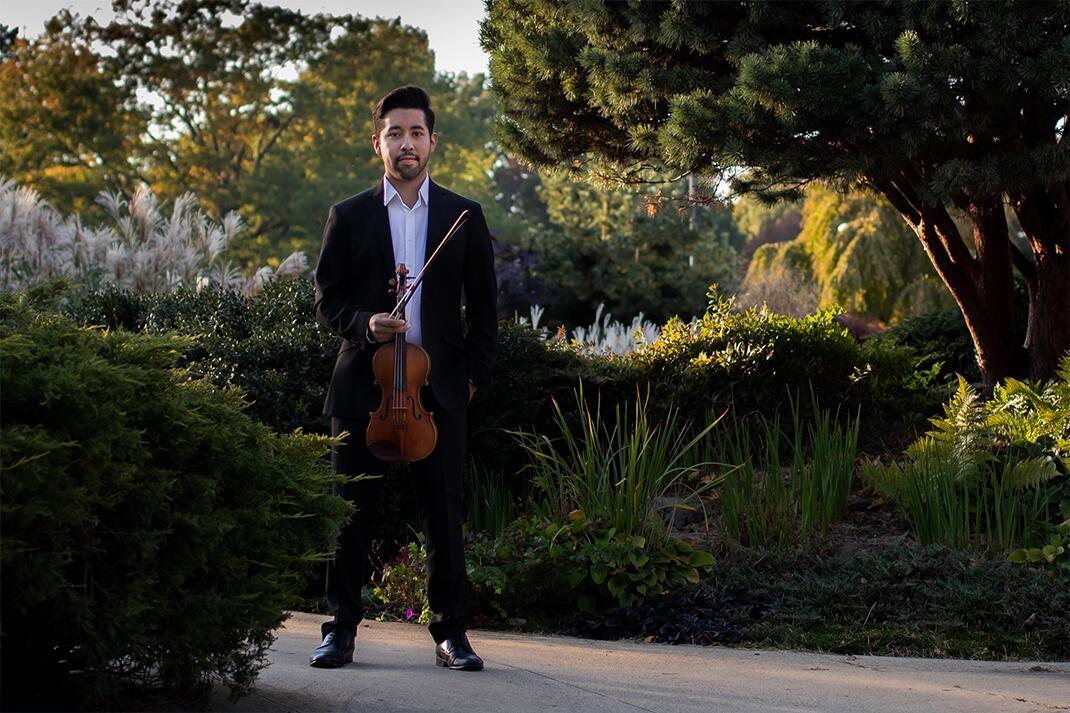 One month before a statewide order sequestered Chicagoans in their homes, Pablo Sanchez received a letter of congratulations from the Grant Park Music Festival.

The 26-year-old violinist had been invited to participate in the 2020 Festival as a Project Inclusion fellow, a highly sought-after residency at the popular summer music festival. Successful after a rigorous audition process, Sanchez had been chosen to take a seat in the Grant Park Orchestra and perform dozens of chamber concerts around the city.

A partnership with the Chicago Sinfonietta, the Project Inclusion program is designed to guide young musicians of color, age 18-29, toward successful careers in music. Its overarching goal is to bring greater diversity within the classical music field.

Of course, the summer of 2020 has been like no other, and COVID-19 has forced the Festival to creatively develop a season of virtual events. One of the highlights has become its Virtual Visiting Masters program—a series of master classes led by an international line-up of guest artists. This year, musicians are holding master classes via Zoom, which can be seen by the public on the Festival’s YouTube channel.

The final master class will take place on Friday, August 7 at noon, with acclaimed violinist Christian Tetzlaff—the musician that Carlos Kalmar calls “one of the greatest violinists alive”—working with Sanchez, a graduate student at the Cleveland Institute of Music, as well as two young Chicago-area players.

“I’m nervous but excited to have this great opportunity,” said Sanchez who will be performing the first movement of Saint-Saëns’ Violin Concerto No. 3. “I admire Mr. Tetzlaff’s musicality and hope to find a different way of looking at the Concerto through my work with him.”

Each year, the Grant Park Music Festival welcomes two violinists, a violist and a cellist into its string program. These gifted young players spend their summer rehearsing and performing with the Grant Park Orchestra in Millennium Park, which often draws crowds of 10,000 people. The fellows give free concerts in neighborhood parks across Chicago, receive coaching from soloists, conductors and section leaders, and play for dozens of day camps that come to learn about music at the Festival.

“Pablo’s playing demonstrated a real maturity, and the committee felt that he was ready to benefit from our intense program,” said Rika Seko, Grant Park Orchestra violinist and part of the Project Inclusion audition committee.  “But we also felt that the program would benefit from his contribution as a member of the Project Inclusion String Quartet.”

And it will…but it will have to wait till the summer of 2021, when the Festival returns to Millennium Park.